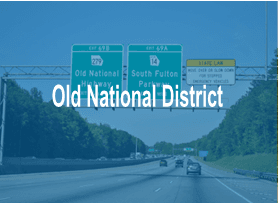 Old National Highway is one of the primary commercial corridors in the City of South Fulton. The construction of I-285 in the early 1960s brought an intersection with a major federal highway to Old National.  By 1970, small farmettes began to give way to stand-alone storefronts and commercial shopping centers. Over time, neighborhoods and commercial nodes developed in tandem to each other.  The automobile made possible new patterns of development that turned rural highways into commercial strips and facilitated new housing to satisfy the growing needs of the country’s post-World War II economy.

Once the premier shopping destination in the south metro area, the Old National District has experienced significant decline in the last 25 years. The district suffers from high commercial vacancies and stagnant/declining rents. Among some of the largest shopping centers in the area, vacancy rates exceed 50 percent.  Additionally, the district is substantially underutilized by the presence of large portions of open lots, uninhabitable buildings and vacant undeveloped parcels.